There is an obscure and mysterious connection between John Hollyer (c.1723- bef. 1790), one of the ‘Coventry Hollyers’, and the famous poet, journalist and lexicographer, Samuel Johnson. Obscure it certainly is, since Johnson suggests that he didn't actually know John Hollyer, but wrote to him on at least two occasions.

Johnson had a wayward cousin, Tom Johnson, who had moved to Coventry and didn’t seem to keep in contact with him. It appears that Johnson used Hollyer as a ‘go-between’ to enquire about Tom. The first occasion was on 6th December 1774 when he wrote seeking information about the finances of “our cousin Thomas Johnson,” “a man equally or almost equally related to both of us”. It appears that Tom Johnson had borrowed money from Samuel on a number of occasions, but Samuel clearly had something of a soft spot for his cousin and he suggested that he was his “nearest relation”.

The second occasion was when Samuel was on his death-bed and making his will. It appears that he wrote to John Hollyer again, enquiring after the children of Tom Johnson, who were added to his will as a codicil. A fragment of this letter survives in the Hollyer family in the USA. 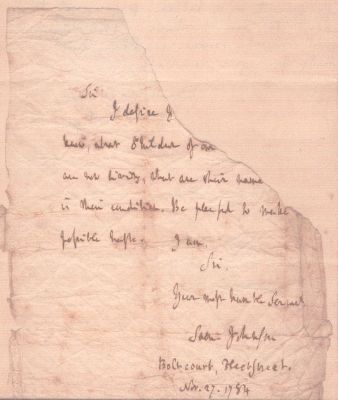 In his book Johnsonian Gleanings, published in the 1930s, A.L. Reade investigates the connection at some length, but fails to find the family link between the two men. That there was a link has been handed down by tradition in the Hollyer family, but as with so many family stories, its retelling has added much uncertainty and confusion about the connection.

One tale has it that John Hollyer's mother Catherine was a sister of Johnson's mother, Sarah Ford. But Reade insists that Sarah had no such sister.

Another family story suggests that the link was through the next generation, when John's son John married a Susanna, claimed to be the daughter of Rev. Ford of Warwick. Not only would this connection be too late to fit the facts, but my own research throws doubt on whether Susanna really was a Ford at all, as the family pedigree claims. Not only have I found no evidence of a marriage of John junior to a Susanna Ford, but I have located (as did Harry Duckworth) a marriage of a John Hollyer of St Michael's, Coventry to a Susanna Slater in 1780 at Newbold in Avon. This seems a far more likely marriage for John.

The Hollyer family did own a third letter, written by Samuel Johnson to Tom Johnson. Frederick Hollyer, the photographer and great grandson of John Hollyer, donated the letter to the Red Cross during the First World War and it was auctioned at Christies.

It seems likely that the connection between John Hollyer and Samuel Johnson will remain a mystery.

This is Johnson's first letter in full:-

Decr. 6, 1774
Sir:
I take the liberty of writing to You with whom I have no acquaintance and whom I have therefore very little right to trouble, but as it is about a man equally or almost equally related to both of us, I hope You will excuse it.

I have lately received a letter from our Cousin Thomas Johnson complaining of great distress. His distress I suppose is real, but how can it be prevented. In 1772 about Christmas I sent him thirty pounds, because he thought he could do something in a shop; many have lived who began with less. In the Summer 1773 I sent him ten pounds more, as I had promised him. What was the event? In the spring 1774 He wrote me word that he was in debt for rent, and in want of clothes. That is, he had in about sixteen months consumed forty pounds, and then writes for more without any mention of either misconduct or misfortune. This seems to me very strange, and I shall be obliged to you if you can inform me, or make him inform me how the money was spent, and give me your advice what can be done for him with prudence and efficacy.

He is, I am afraid, not over sensible of the impropriety of his management, for he came to visit me in the summer. I was in the country which perhaps was well for us both; I might have used him harshly, and then have repented.

I have sent a bill for five pounds which you will be so kind to get discounted for him, and see the money properly applyed, and give me your advice what can be done. I am, Sir,